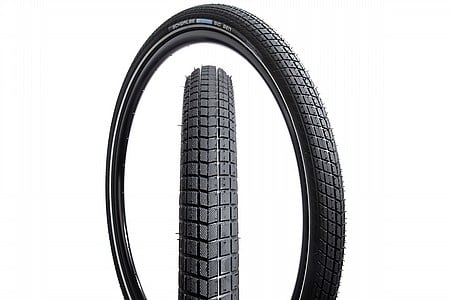 I took one star away only because Schwalbe offers a Big Ben Plus with better flat protection, and reinforced sidewalls. Of course this adds some weight. But for powerful E bikes or heavy cargo bikes probably worth it.

Some of the other reviewers here may want to try those next. For more normal cycling these would be an excellent choice.

Was this review useful to you? Yes/No
Thank you for your feedback.
by jadekatz
Casual Cyclist
St Paul, MN
Value Rating
Overall Rating
1 of 3 customers found this review helpful.
Great Tire thanks to Customer Service here

First off I am a 67 yr old woman who had always ridden regular 26 or 27 bikes so when I was off my feet for a year and a half and my muscles were sadly lacking to ride again I bought an electric bike which worked out great to help me rebuild muscle while riding. However it came with no information on how to handle a flat tire. I had to watch you tube to figure it out - but there was no sizing only psi on the tire so after much wrong information from reviewers on a site and getting the wrong size and then wrong valve I started contacting customer support here. I was so happy with the responses that I recommended them one of the you tube sport for my brand of bike. Tires arrived today and fit perfectly! I have to say this is the only place I would go to buy from because they know their stuff! The tires look and feel so much nicer than pictured!

Was this review useful to you? Yes/No
Thank you for your feedback.
by Robert ainsworth
Monson ma
Overall Rating
3 of 8 customers found this review helpful.
Very happy with delivery timeline

Big Ben tire was my first buy. Very happy in all areas of service

Was this review useful to you? Yes/No
Thank you for your feedback.
by Hesso
Cycling Enthusiast
Colorado
Value Rating
Overall Rating
7 of 7 customers found this review helpful.
Best Tires For Urban Riding

The Big Ben by Schwalbe turned out to be an exceptional tire. I was concerned they would be heavier than the Kendas they replaced, but the Big Ben have that very pliable (thin wall) sidewall and they are not heavy at all (though that's a subjective statement), you can find the specs online.

The rolling resistance is low, they are quiet. Even though they are described as 'chunkier' and a 'cruzer' type of tire, they are slightly narrower than my WTB Weirwolf 2.1 mountain bike tires (probably because the knobbies stick out on the WTB's). Meaning they don't appear bulky for this type of tire.

I ride on rail-to-trail, blacktop bike paths and concrete but occasionally have to traverse some dirt paths. If you use them as intended, they are great tires. I'm considering getting an extra pair to store for later.

Was this review useful to you? Yes/No
Thank you for your feedback.
by SP
Cincinnati
Overall Rating
12 of 13 customers found this review helpful.
Mixed results

I have these on my Stromer ST1. I have had pretty good luck with them. One set now has 2300 miles behind it, not a single puncture. They can handle a heavy loadIve carried a total load of 300 lbs. on rough city streets as well as bike trails and they are very (not totally) puncture proof. I hit a patch of glass shards and got a flat. I also had one with a sidewall split after 100 miles. They do grip and handle well.

*Orders received before 3:00PM Pacific time are shipped the same day (Mon-Sat). Orders over $50
are shipped free (USA only, excluding AK and HI). Some exceptions apply. See Shipping for details. 57