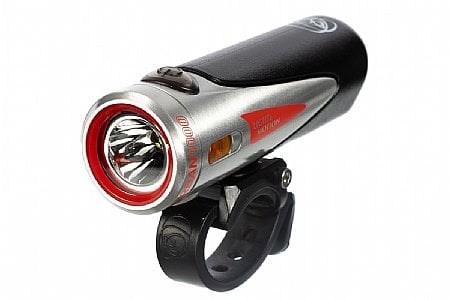 I already had the Urban 900 which I like that was also really bright. I gave it to my girlfriend since she doesn't ride at night very often but wanted her to be able to see and be seen safely.

The main difference between the 900 and 1000, besides 100 more lumens ;) is the "flash" mode. The 900 doesn't flash but fades from high to low back to high, etc.; the 1000 does the same fade back and forth but throws in a quick flash burst after each fade cycle, approx every 5-10 seconds or so. At first I didn't like the added burst but have gotten used to it and think it's an attention getter without being too annoying like the always on burst mode of an older cygolite I have. It would be nice if there was another setting on the 1000 to have the fade without the burst in addition to the current mode with the burst. As I said, I like and am used to the burst of light but would be nice to have the option of no burst as well.

The 1000 puts the lumens to good use by shooting light far ahead and also enough to the side that I'm not surprised by anything in or near my path when riding a road bike between 15-20 mph. Even in lower light modes it's bright enough if you're riding closer to 10 mph.

Was this review useful to you? Yes/No
Thank you for your feedback.
by Jeffrey Lee
Daily Commuter
Philadelphia
Value Rating
Overall Rating
Strong enough for roads at night, even very bad roads

I tested this on many night rides. On the second highest setting, it was good enough for riding on smooth roads. For very bad roads with many potholes etc., I had to put it on the highest setting.

The endurance of the battery so far seems to be what the specs said, i.e. around 90 minutes at the highest setting, and twice as long on the second highest setting. (I've never needed the lower settings.)

If it had a battery that a user could replace, it would be much better because the light seems well made and very likely to outlast the battery. It is also very expensive, so batteries that consumers could buy and replace would make this a far greater value. It would also be a greater value if the manufacturer did the battery replacements, i.e. to avoid wasting resources etc. even if it did not save much money. Lots of riders want to consume in a less harmful way.

Was this review useful to you? Yes/No
Thank you for your feedback.
by BigMac
Cycling Enthusiast
Massachusettes
Value Rating
Overall Rating
2 of 2 customers found this review helpful.
Bright light easy to mount light weight.

Bought this light on sale, Light is very bright and easy to mount in a few seconds. Charges fast and is not heavy. can remove easy to charge and put on another bicycle.

Was this review useful to you? Yes/No
Thank you for your feedback.
by SFBiker
Cycling Enthusiast
SF Bay Area
Overall Rating
1 of 1 customers found this review helpful.
Solid Light

I've been using Light & Motion bike light products for many years now. They are very well built, perform well and provide long service life. I use this light primarily as a daytime running light. The SafePulse mode is quite eye catching. However, I'm docking 1 star because it always turns on to the brightest steady mode instead of remembering the last used mode. This means it takes 4 clicks to get to the SafePulse mode.

Was this review useful to you? Yes/No
Thank you for your feedback.
by Anonymous
michigan
Overall Rating
Great front light for the price.

Would get another one for sure.

*Orders received before 3:00PM Pacific time are shipped the same day (Mon-Sat). Orders over $50
are shipped free (USA only, excluding AK and HI). Some exceptions apply. See Shipping for details. 10