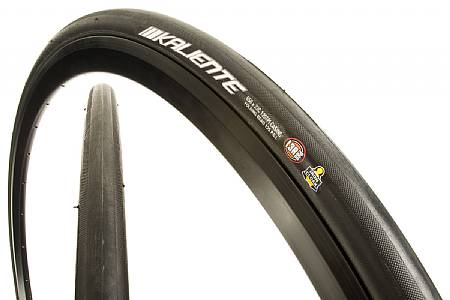 I ride an open cockpit Medium Bacchetta Corsa 650c, laid back and slightly off center with the slight majority of rider weight resting upon the back wheel. The bicycle came standard with a set of Kenda Kaliente. Miffed slightly at the manufacturers stingy choice of tire, I eagerly awaited the day the Kenda wore through so I could replace them. Roughly on about mile 2,600 of rough chip-seal roads, my gravel driveway, and the occasional gravel road in order to get around a stopped train - the tires gave out. Well, not exactly gave out. I likely could have gotten myself home on them if I were out, say 100 miles away from my house, but I noticed a flake of rubber starting to peel off the rear tire tread (I do rotate about every 500 miles, give or take a few). Finally! At last I could order the Gatorskins! With the Gatorskins on the bike, I first noticed the slower, and more sluggish nature of the ride. No regrets though! These puppies are bomb-proof! Note, I never had one single flat on the Kendas. Neither did I have any flats on the Gatorskins either. The Gatorskins lasted for roughly 2,500 miles of the same rough chip-seal roads, my gravel driveway, and the occasional gravel road in order to navigate around the stopped train. Another Gatorskin set was installed promptly at the local bike shop. Another 2,600 uneventful miles later I was back. Notice how many flats I've had. Zero. Zilch. None. Amazing? Perhaps, but that's just how I roll. Regardless, being a sucker for science, I decided to develop more of the trial I had unknowingly embarked upon. Like Pascal, I had to wager. The next tires I bought after the failure of the latest set of Gatorskins was the latest version of the Kenda Kaliente. I immediately noticed the peppy feel of the lighter and more nimble Kendas. Having thought it to be a fluke of conscience, I decided to inquire about the weight difference between the two different tires. On a set, transferring from the Gatorskins to the Kendas, I saved over 200g!!! Compound the rotational force of the heavy tire on top of that, and it is no wonder that I felt an immediate difference! I am now on my second set of Kenda Kalientes since the switch back. I get the same mileage out of each tire, better road feel and grip with the Kendas (especially noticeable in the corners), and a less expensive price tag to boot! I am sold.

Was this review useful to you? Yes/No
Thank you for your feedback.
by chuck
Competitive Racer
ma
Value Rating
Overall Rating
a very good buy

road tire for my recumbent for which I need 650's

Was this review useful to you? Yes/No
Thank you for your feedback.
by Bubbabent
Cycling Enthusiast
Alabama
Value Rating
Overall Rating
Good value

I agree with Joe Bentrider and have the same bike and tire story. I was dissapointed with the slower feel of the Gatorskins but they hold up. I am now going back to the Kaliente.The logos do wear out due to positioning but no big deal.

Was this review useful to you? Yes/No
Thank you for your feedback.
by jerry witherspoon
Cycling Enthusiast
64014
Value Rating
Overall Rating
4 of 4 customers found this review helpful.
superb

I bought this tire as a replacement on my Bacchetta team CA 2. It rides smoothly and easily over highly aggregated asphalt. It appears new even after 1200 hard and fast miles.

Was this review useful to you? Yes/No
Thank you for your feedback.
by FireMedic158
Competitive Racer
Marshall, TX
Value Rating
Overall Rating
1 of 2 customers found this review helpful.
Seems to be a great tire so far.

I have about 200 miles on these so far but they seem to be a great tire, especially for the price.

Was this review useful to you? Yes/No
Thank you for your feedback.
by Anonymous
Cycling Enthusiast
Houston, TX
Value Rating
Overall Rating
5 of 7 customers found this review helpful.
Logo does not hold up on tire, make the tire look old after minimum use.

Was this review useful to you? Yes/No
Thank you for your feedback.
by Anonymous
Cycling Enthusiast
FL
Overall Rating
1 of 1 customers found this review helpful.
Great tire for the cost!

I have been using this particular tire for the last 9 years and it has served me well. I get 3000 miles out of them. As you may know, buying an expensive tire does not necessarily mean it is superior. All it takes is a shard of glass or some sharp debris in the road to ruin a perfectly good tire. I have used different tires in the past and found these are the best buy for me.

*Orders received before 3:00PM Pacific time are shipped the same day (Mon-Sat). Orders over $50 are shipped free (USA only, excluding AK and HI). Some exceptions apply. See Shipping for details. 97