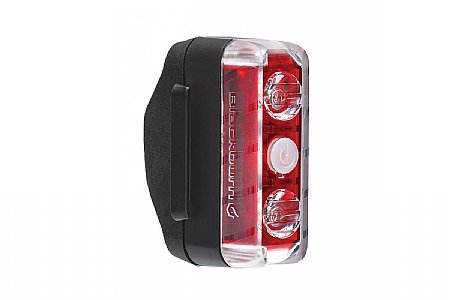 This rear light has two very bright red LEDs, top and bottom. These hi-intensity LEDs have a wide dispersion range so they can easily be seen well off-angle. The LEDs operate together, they can be on solid, or blink about once per second. They have two different intensities: bright and very bright. I run bright / blinking which is plenty bright for daytime or nighttime and can last 4 hours+. Very bright is objectionable, almost blinding to people behind me when I ride in a group, and Very Bright runs the battery down 2x faster than the lower setting. There is a small hassle when it comes to charging via USB cable. You have to remove the light entirely from the bike! Then you have to remove the rubber weather seal / rubber interface to the bike frame - from the back of the light. Once this weird rubber interface is removed (careful, don't lose it!) you then remove the small protective rubber cover from the USB port - then you can finally plug in the charger cord. With my other model Blackburn light, I can leave it mounted on the bike, and just plug in the USB cable. So subtract 1 star for slight charging hassle which gives a 4 star rating.

Was this review useful to you? Yes/No
Thank you for your feedback.
by Steven
Cycling Enthusiast
Raymond,MN
Value Rating
Overall Rating
1 of 1 customers found this review helpful.
Excellent quality for the low price!

I needed a taillight bright enough to be seen during the day in this rural farm area I ride my bicycle. We've just started harvest season and the traffic is heavy with out of state truck drivers hauling crops.

Was this review useful to you? Yes/No
Thank you for your feedback.
by Anonymous
Overall Rating
Not bright enough

Bright but not enough to be seen from far distance

Was this review useful to you? Yes/No
Thank you for your feedback.
by Dimptruck67
White Oak, Texas
Overall Rating
Great Product

I've had several of these lights in the past. Very bright lights. Great battery life. All in all a great product.

*Orders received before 3:00PM Pacific time are shipped the same day (Mon-Sat). Orders over $50
are shipped free (USA only, excluding AK and HI). Some exceptions apply. See Shipping for details. 79